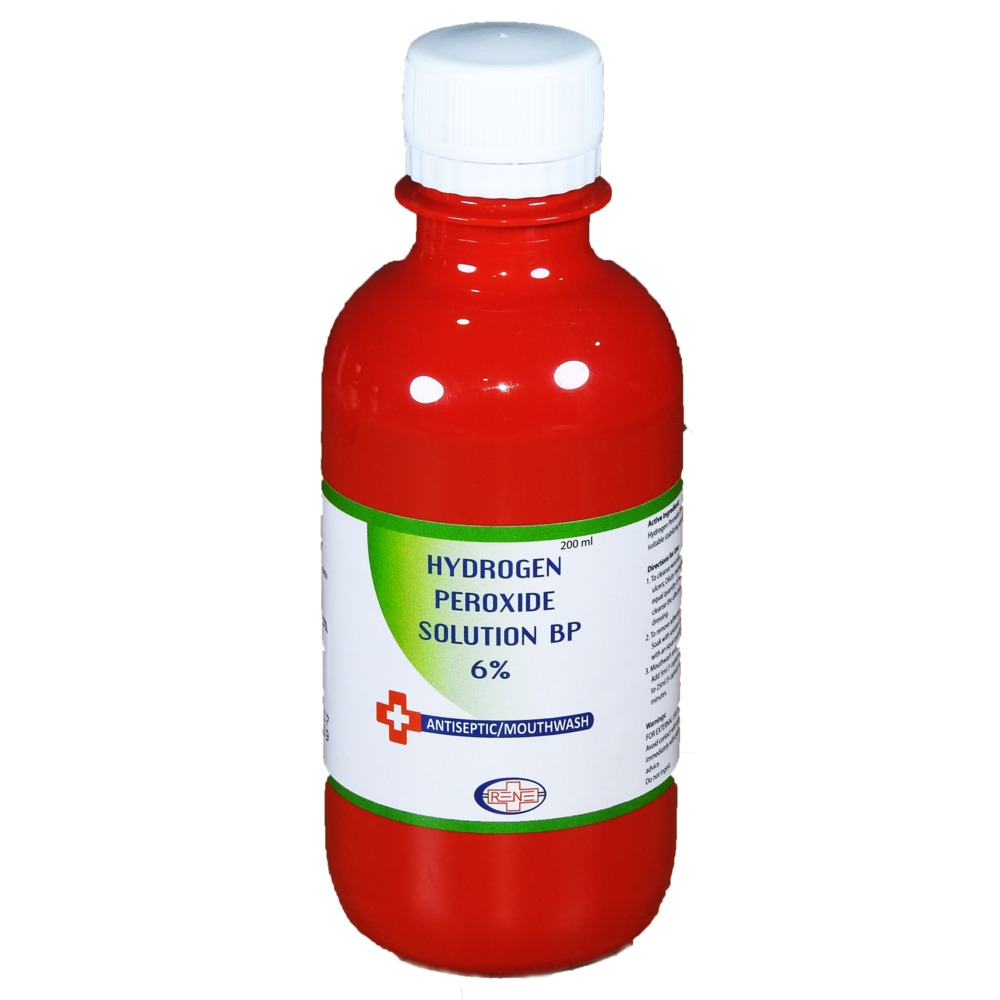 Therapeutic indications
It is used for the treatment of cuts, wounds and superficial damage to the skin (abrasions). It is used as a gargle or mouthwash.

Posology and method of administration
For adults, including the elderly & children:

Method of administration
For the treatment of cuts, wounds & abrasions (DO NOT USE UNDILUTED AS IRRITATING BURNS OF THE SKIN, MOUTH OR EYES MAY RESULT):
Dilute with an equal quantity of water. Apply to the dressing and leave to soak before positioning on the wound. Affix with a bandage or sticking plaster.

As a gargle or mouthwash (DO NOT SWALLOW):
For adults, including the elderly & children over 8: Use three 5ml spoonfuls (15ml) in half a glass of water (120 ml).

Special warnings and precautions for use
Avoid contact with eyes.
Product is not suitable for rectal administration.
It is dangerous to instil Hydrogen Peroxide into closed body cavities from which the released oxygen has no free exit.

Interaction with other medicinal products and other forms of interaction
Urine/Glucose tests strips – Hydrogen Peroxide could interfere with the Clinitest (test for sugar) and Labstix test (urine test) giving false positive results.

Pharmacological properties
Mechanism of action:
It works as a disinfectant, antimicrobial agent and also as an oxidiser. Hydrogen peroxide exhibits antimicrobial properties against most forms of microorganisms, including dormant forms with known high resistance profiles, such as bacterial spores and protozoal cysts. It acts as an oxidative biocide to generate free radical species to induce DNA, protein and membrane lipid damage via oxidation.
Pharmacokinetic properties
It is reported that hydrogen peroxide is decomposed before absorption in the intestine. Solutions of hydrogen peroxide displays poor penetration when applied to tissue. Hydrogen peroxide is reduced by glutathione peroxidase, an enzyme in the liver

Side effects
Very serious side effects – If any of the following happens, stop using Hydrogen Peroxide solution and tell your doctor immediately or go to the nearest hospital emergency department:
Swallowing of diluted solution may cause feeling of sickness (nausea) or vomiting. Accidental ingestion of concentrated solutions of hydrogen peroxide may lead to blockage of veins and arteries (venous or arterial embolism)
Rare (occurring in less than 1 in 1,000 patients); Isolated reports of gullet (oesophageal) and stomach (Gastric) irritation
Other side effects • If you continuously use Hydrogen peroxide as a mouthwash, it may lead to increase in size of the tiny projections that cover the surface of the tongue (reversible hypertrophy of the papillae of the tongue). In such a case, stop using Hydrogen peroxide solution. If any of the side-effects gets serious or if you notice any side-effect not listed here, please tell your doctor or pharmacist.

STORAGE INSTRUCTIONS
Store in a cool, dry place protected from light.
Keep the bottle tightly closed. Do not store above 30 °C.
Keep out of reach and sight of Children.